What is varicose vein ?

Varicose vein of legs is common, affecting 1-15% of adult men and 20-25% of adult women. The leg vein normally contains multiple valves which helps the blood flow in direction of the heart. When these valves are damaged, blood starts pooling in the legs causing swelling of the legs, aching pain, heaviness, fatigue, skin discoloration, itching, varicosities (prominent vein) and if not treated it may develope non-healing ulcers in leg. Ultimately, the person is forced to lead a disabled life. 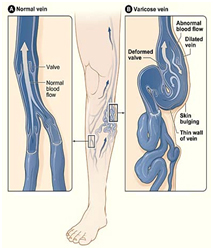 The varicose vein consists of: - A. Venous insufficiency or venous reflux at groin B. Prominent and dilated perforators. C. Dilated tortuous side branches. 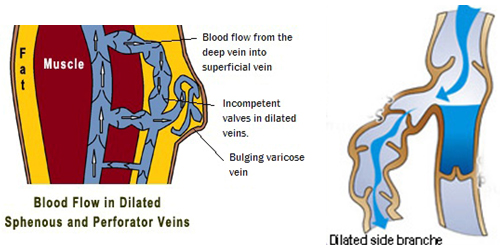 Comfortable and sedentary life-style, modern fashion, special postures adopted while performing professional duties have contributed to increased incidence of a set of diseases unheard of in the past. Varicose vein disease is one of them and is a direct result of sedentary life-style. The problem has become very common during these days. According to one estimate, 15 to 20 per cent of the population in India is suffering from varicose vein disease these days. Women suffer from this disease four times more than men. There is an increased risk of the development of varicose vein among young females who wear tight jeans and high-heeled sandals. 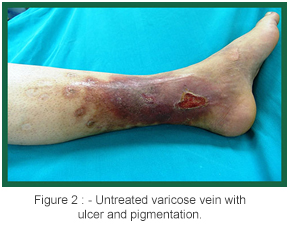 The most common presenting with symptoms: -

The important causative factors are obesity, lack of exercise, abnormal pressure on veins during pregnancy, abnormal life-style, prolonged standing and prolonged sitting with legs down. Due to advanced age, overweight and lack of exercise veins of legs become very weak and, therefore, develop into varicose veins.
Today a lot of occupations and professions have sprung up where a person is required to either constantly stand up for a long time or made to sit with legs hanging down for a considerable time. Computer professionals, receptionists, security guards, traffic policemen, salesmen working at counters in shops and departmental stores and persons doing desk jobs day in and day out are the worst sufferers of varicose veins.

Among females, due to some hormones, the walls of veins become enlarged and dilated. Besides, during pregnancy because of a lot of pressure on leg veins, these become weak and varicosed. Fashion is playing havoc among women. High-heeled sandals and tight belts and panties are significant contributors to the development of varicose veins, as these items obstruct the normal flow of blood in the veins.

This is done by general examination and ultrasound Doppler study which can show the exact site of disease in the form of damaged valves & dilatation of veins. 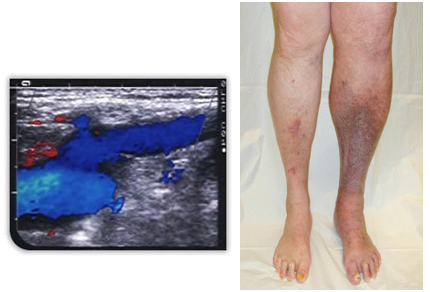 Bleeding from Superficial Veins - long-standing high pressure in the veins may develop an area that bleeds through small sites, no larger than pinholes. Most of these occur around the ankle, but spontaneous bleeding can also occur anywhere there is high venous pressure

Venous stasis dermatitis, also known as venous eczema, is a common inflammatory skin disease that occurs on the lower extremities in patients with severe chronic venous congestion. It can arise as discrete patches or affect the leg all the way around the ankle. Symptoms of this condition include swelling (typically concentrated around the legs or ankles), changes in skin color and texture, and pain. The affected skin is itchy, and assumes red, purple, or brown colors.

Radiofrequency ablation (RFA) is the latest and most effective, patient friendly and non-surgical treatment for varicose vein using Multipolar RFA machine.Under color-doppler ultrasound vision, a radiofrequency catheter is inserted into the abnormal vein and the vessel treated with radio-energy, resulting is closure of the involved vein.
The interventional radiologist (are uniquely skilled in using the vascular system to deliver targeted treatments throughout the body without surgery) accesses the abnormal saphenous vein just above ankle or below the knee percutaneously through a small cannula in abnormal vein. Ablation uses a thin, flexible tube called a catheter with tiny electrodes at the tip of the catheter, which heat the walls of the varicose vein, and collapses the thick veins.

Advantages of Treatment with RFA